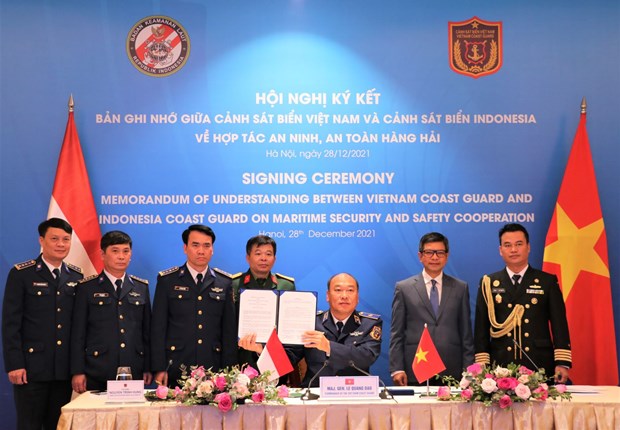 Commander of the Vietnam Coast Guard Major General Le Quang Dao holds up the signed MoU. (Photo: VNA)Hanoi (VNA) – The Vietnam Coast Guard and the Indonesian Maritime Security Agency on December 28 signed a memorandum of understanding (MoU) on cooperation in strengthening maritime security and safety between the two forces. The signing ceremony was held online.

The MoU marks the official beginning of the close and comprehensive cooperation between the two agencies since they signed a Letter of Intent on enhancing bilateral cooperation on August 23, 2017. The MoU sets forth specific contents and clearly defines the responsibilities and authority of each party in the process of implementing the document’s contents.

Speaking at the signing ceremony, Commander of the Vietnam Coast Guard Major General Le Quang Dao affirmed the importance of collaboration between the two forces. Vice Admiral Aan Kunia, chief of the Indonesian Maritime Security Agency said that the Vietnam Coast Guard is an important partner in Southeast Asia in ensuring maritime security and safety in the region. He expressed his belief that, on the basis of the MoU, the two parties will deepen and expand the bilateral friendship and cooperation.

The newly-inked document is expected to serve as a tool, corridor and mechanism for the two sides to enhance mutual understanding, and practical and effective cooperation to settle cases arising at sea. The signing is an important milestone that opens a page of deeper and more comprehensive cooperation in the bilateral relationship between the two sides. The MoU is one of the temporary measures in delimiting the exclusive economic zone between the two countries, contributing to preserving peace, stability, cooperation and development on the region’s waters./.